The question of how to integrate refugees into society has politicians scratching their heads. Nature, it turns out, may hold a key.

Earlier this year I completed my master’s degree thesis having conducted research looking at the impact of nature-based leisure on the integration of refugees in Canada. My interest in this research sprang from my own experience of leisure in Canada’s national parks, and the mountain parks in particular, as a new immigrant over 30 years ago. Drawn to those magnificent and iconic landscapes I’d only seen in books and on postcards awakened in me a sense of belonging in my new country and I return to them often for solace, restoration, and peace. I wondered, years later, whether leisure experiences in Canada’s natural spaces would help our most vulnerable newcomers to transcend their painful pasts, find peace, and provoke a sense of belonging in them, too, that they were finally home.

Sitting at a table in his tiny living room, Joehaan, a refugee from Sudan, and I are poring over the photos he’d taken of the countryside at Long Lake Outdoor Education Centre in Athabasca, just north of Edmonton. Just 20 years old, he’d lived a hellish existence for 10 years as a refugee in Lebanon, before resettlement in Canada with his family. He was one of my four study participants—all refugees who were receiving settlement services from Catholic Social Services. A group of 60 or so refugees to Canada, some from afar as Iran, Congo, Cuba, Burundi, and Somalia, had just experienced a winter camping trip in Canada—an overnight stay in a pristine, natural area and the site of my research. At Long Lake they’d enjoyed cross-country skiing, snowshoeing, and ice-fishing aided by Alberta Parks and Catholic Social Services’ staff and volunteers.
I’d asked the people in my study to take photos of their camping trip leisure experiences that were meaningful to them. One of the most poignant was this one. 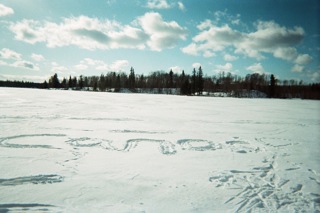 Joehaan had waited until everyone had gone cross-country skiing, then he’d walked out onto the frozen lake and had written “Canada” in large letters in the snow. He told me, “I put this name because they wanted me to come here. Canada wanted me to come and be part of it, so I was glad and I will never forget this. So I thought, when I was taking pictures, to write something for reminding, for memoration.” This was a significant revelation coming from a young man who had few memories of his Sudanese homeland, and had spent much of his childhood in fear, dodging the authorities in Lebanon, denied schooling beyond grade six, and whose life was spent mainly indoors because of the racial discrimination his family faced daily. “Do you know I spent my most life inside?” he asked me. “Lebanon is like a jail in the summer,” he added, meaning that though it was stiflingly hot, he could not go outside and play like any normal child because it was dangerous to do so.

Monir, a young mother, a Baha’i from Iran, and another of my study participants, had sought asylum in Canada because she had faced religious persecution in Iran, and was denied citizenship and access to post-secondary education there because of her faith. In addition, the constraints placed on women in an Islamic society had discouraged her from participating in sports she loved, or even riding a bicycle because cycling was deemed an indecent thing for women to do according to the mullahs. And even though she is not Muslim, as she said, “The society is an Islamic society and it affects everybody.” In this restrictive environment, in which she was permitted to make few decisions of her own, the nature experience had an extraordinary effect: she found courage and confidence blossoming within to make her own decisions. She said,

… Always I was told, “You can’t”, “Oh, don’t do that”. Even sometimes I would like to do something for myself or others … somebody kept me [from doing something], but now I feel OK, I can do it.

In fact, so strong was her surging sense of self-confidence that when her son wanted to emulate one of the young men using his cross-country skis to ski down small hills, she let him. She said:

First I feel that Siavash could not do it. But I never said, “Siavash, you could not that,” because I know it’s in my fear. I help him and after that I enjoy to help him. His courage came into me, you know. I put away my fear: he can do it. 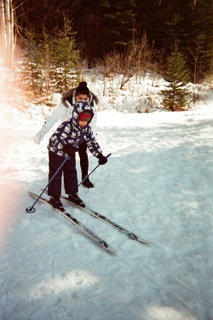 This image, she said, represented all the boldness, independence, and empowerment to express the free will she’d been denied before.

Other refugees in my study made similar expressions of resolve and resilience and after the trip they expressed an urgent desire to avail themselves of opportunities in Canada to rebuild their shattered and disrupted lives. And their exposure to nature-based leisure for connecting and sharing with others in an awe-inspiring, natural environment seemed to play a significant role in evoking their feelings of renewal and restoration, and in their ability to surrender, albeit briefly, their daily cares. I should emphasize that Alberta Parks and Catholic Social Services staff went to great lengths to create a welcoming, inclusive, and safe environment and this seemed to provoke feelings of confidence in the refugees, to stoke their inner resolve to be competent at the activities, and to trigger their personal growth. This newfound confidence was apparent in refugees’ willingness to try unfamiliar sports, volunteer for camp duties, and engage deeply with others who had been strangers to them before the trip. As Berry (2005) asserts, the welcome newcomers receive and the attitude of those in the new host country towards newcomers play a profound role in how newcomers acculturate—and whether they integrate into the broader society.

Refugees’ responses to nature ranged from fascination with the endlessness of the snowy vistas, the novelty of recreating in the snow, fear that wild animals might be present or that the ice on the lake would crack; relief and trust that their hosts would protect them, to ruminations about being one with the cosmos in the heart of the forest. The campfire, so pivotal to outdoor leisure socializing, proved particularly poignant for a refugee from the Democratic Republic of Congo. Nicole’s husband had been abducted by rebels and she’d witnessed the murder of her parents and siblings in her homeland. For Nicole the campfire evoked nostalgia for her homeland where the fire had been a daily gathering place for companionship, celebration and ritual, and where the elders shared their knowledge and told stories. To see the fire playing this role at the camp helped to make an unfamiliar place seem more familiar to her. She told me, “There are some things that made me compare my home country and Canada, so I thought and I felt the world is the same. There is no big difference.”

So why should we care whether refugees have access to, or respond well to a winter camping trip? Because helping refugees to settle and integrate into the larger society means more than access to housing, healthcare, education, food, and a job. It also means access to leisure and specifically to leisure in nature. Why? Most refugees suffer from post-traumatic stress disorder (PTSD) and depression (Fazel, Wheeler & Danesh, 2005) that can last for years after resettlement. The combination of nature, with its restorative and calmative effects (Kaplan, 1995) and leisure has been shown to promote happiness, well-being and provoke personal growth (Knopf, 1987) and may help to meet refugees’ needs for autonomy, competence, relatedness to others (Deci & Ryan, 1985) and meaning as they settle. Nature-based leisure can help people to transcend their troubled pasts (Kleiber, Hutchinson & Williams, 2001). And when they’re able to do that, they may choose to integrate (Berry, 2005).

In a world concerned that the wave of refugees from Syria and elsewhere arriving at our shores cannot be easily resettled or integrated, or their emotional wounds healed, we have a unique resource: the power of our abundant natural spaces to help restore some equilibrium, calm, spark a sense of belonging, and ameliorate the impacts of PTSD which, if unchecked, may be transmitted to the next generation (Baranowsky, Young, Johnson-Douglas, Williams-Keeler & McCarrey, 1998).

Nature-based leisure isn’t a panacea. What’s critical is the combination of a welcoming, inclusive host society that is supportive of newcomers; newcomers, for their part, who deeply wish to be part of Canadian society, and access to nature-based leisure that affords connection to other Canadians. Together these factors may prove a potent elixir for reducing refugees’ acculturative stress and promoting their integration and successful resettlement.

Kaplan, S. (1995). The restorative benefits of nature: Toward an integrative framework. Journal of Environmental Psychology, 15, 169-182. Retrieved from http://www.sciencedirect.com.ezproxy.royalroads.ca/science/article/pii/0272494495900012